Yeah, I opened my first bank account at Kiwi Bank. Last week on Wednesday I tried to get one, but the officer told me, that I have to bring some papers and my German tax number.The next morning, I phoned with Dieter to look after this. It’s really nice. When I wake up early, it’s afternoon in Germany and a good time for speaking with my family or friends.

On Saturday I tried a second time, but unsuccessful again. At the weekend there are many people coming to the bank and I need an appointment. OK, next attempt. We arranged an appointment for today after school.
So I left school on time by bike to meet the nice guy at the Kiwi Bank. He remembered me and we went in a separate office, where it was much quieter.

And it‘s every where the same. You have to give up a lot of information, which is saved in the dark data pool from the Kiwi Bank.

30 minutes later and after signing nearly 10.000 papers – he assured me, that I don’t get a washing machine – I got a card for paying in NZ.

And here is it: 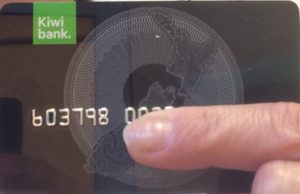